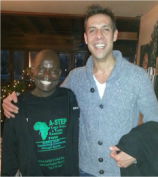 Timothy and Paul Core Founders of A-STEP
A-STEP was first initiated as a football team by a group of youth volunteers led by Coach Timothy Lusala in 2002. The concept then was to engage the youths in the community through competitive sporting. The group expanded its outreach to players in the organized groups like community churches, schools and CBOs.

A-STEP got a big boost during an invitation to Tanzania for a tournament organized by Christian Sports contact (CHRISC) of Norway in 2004. In a bid to have the youth get bus fare to Moshi, the youth collected and sold beverage bottles to Coca Cola Company in Eldoret and raised adequate fare that was topped up by CHRISC. The turnaround was witnessed after the trip when every youth among the 40 started one football team each, within one month of returning from the inspiring tournament in Tanzania, and by the end 2005 there were over 800 youths and kids engaged in sporting within the area of operation.

A STEP was formally organized, expanded and registered in December 2006 as a Community Based Organization (CBO) and since then it has leaped with focus and vigour in reaching out to the youth. A-STEP has in the last five years organized over ten city wide sports tournaments in Uasin Gishu and Elgeyo Marakwet Counties. The themes of these tournaments were Economic empowerment, Life skills trainings, Building capacities of the Community, Groups and youth in peace, HIV/AIDS, Child Protection (delinquency & abuse), Drug abuse awareness among others.

In the year 2008/9, A-STEP promoted sports among the communities in this region with a bias for the youth and children from the urban slums and rural poor. Due to its work, a number of community support groups have been set up by different stakeholders to support A-Step’s work at the grassroots. The organization was also involved in some relief and development work, partnered with the Kenya Red Cross Society in assisting the Internally Displaced Persons (IDPs) as a result of the 2007/2008 post election violence. A-STEP partnered with Peace Net Kenya and Oxfam in Electoral Violence Response Initiative through Sports and also partnered with Kenya Community Development Foundation (KCDF) in Integrating Youth in Sports and conflict resolution. The organization partnered with Mercy Corps in Strengthening Peace in the communities through Local Empowerment for Peace through Sports (LEAP Sports). This support enhanced HIV/AIDs awareness campaigns Initiative, which the theme was Kick and Test where the main aim is to see an HIV free generation.

The organization was supported by Ketelaar’s family from the Netherlands and PAX CHRISTI of the Netherlands during its early stages of inception and currently partners with government departments and sports associations in its programs.

Today, A-STEP continues to champion and demonstrate the place and power of sport in peace building and conflict management through youth mobilization, engagement, and fight against vices like HIV/Aids, Drug abuse and Crime. A-STEP also uses sport in advocating for the best interest of the child as stipulated in the UNCHRC, The African Charter and the Children’s Act in Kenya’s constitution.